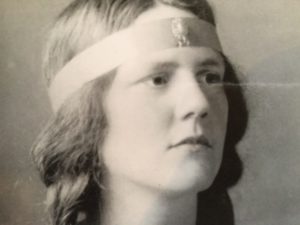 “It’s a grand thing to get leave to live”

on Saturday 10th November 2018 at 2.30pm followed by tea
at the Maintlandfield Hotel, Haddington

Erlend Clouston will relate how and why Nan Shepherd’s photo appears on the new Royal Bank of Scotland £5 note.

Nan Shepherd was born in 1893 and died in 1981. She spent almost all of her life in north east Scotland, close to Aberdeen. This allowed her extraordinary explorations of the natural heritage of the Cairngorms.

He will concentrate on Shepherd’s book “The Living Mountain” which has been acclaimed as one of the classic novels about the Scottish landscape. Whilst this book explores Shepherd’s love of the Cairngorm mountains her insights are applicable to any natural landscape, not least those of East Lothian.

Non members welcome, however a £2 contribution towards costs appreciated

At the last talk of the winter series on Sat 10th March Professor Ian Ralston OBE gave an illustrated talk on Neolithic times at Doon Hill and Balbirdie in Aberdeenshire. Ian has been a member of the society since he was a school boy and was one of the local volunteers who helped Brian Hope Taylor with his excavation between 1964-6. Hope Taylor had carried out his excavation of Yeavering in Northumberland which he had identified as a palace of Edwin, the 7th century King of Northumbria. Hope Taylor concluded that the building on Doon Hill had been similar in scale and date to that at Yeavering.

The site was stabilised as a tourist attraction and usually referred to as an Anglo-Saxon hall but the dig was not fully written up. This omission caused a lot of local frustration. This interpretation was challenged in 1980 when a similar site was discovered and excavated at Balbridie. It was established that Balbridie had been built about 3800 BC.

Hope Taylor died in 2001 and it was possible thereafter to radiocarbon date some of his artefacts. This established that they dated from c 4000 BC Indicating that the timber halls were more than 4,000 years older than had been thought.

This amazing conclusion was reported in the Times by Norman Hammond that very day. It made us feel that we were at the sharp edge of knowledge. The lecture was followed by some interesting discussion and by some reminiscence going back to 1966.

The final lecture in the Antiquarian and Field Naturalists Society Winter Programme was an illustrated lecture entitled The Rennies of Phantassie It was given in the Church of Prestonkirk on Tuesday 18th March by Joy Dodd to an appreciative audience. END_OF_DOCUMENT_TOKEN_TO_BE_REPLACED

East Lothian Antiquarian and Field Naturalists Society completed their programme of the 2010-2011 year with the annual dinner in the Maitlandfield Hotel Haddington on Friday 8th April when Robert Russel gave an illustrated talk entitled ‘ Walking the John Muir Way’ and made his book of the same title available.