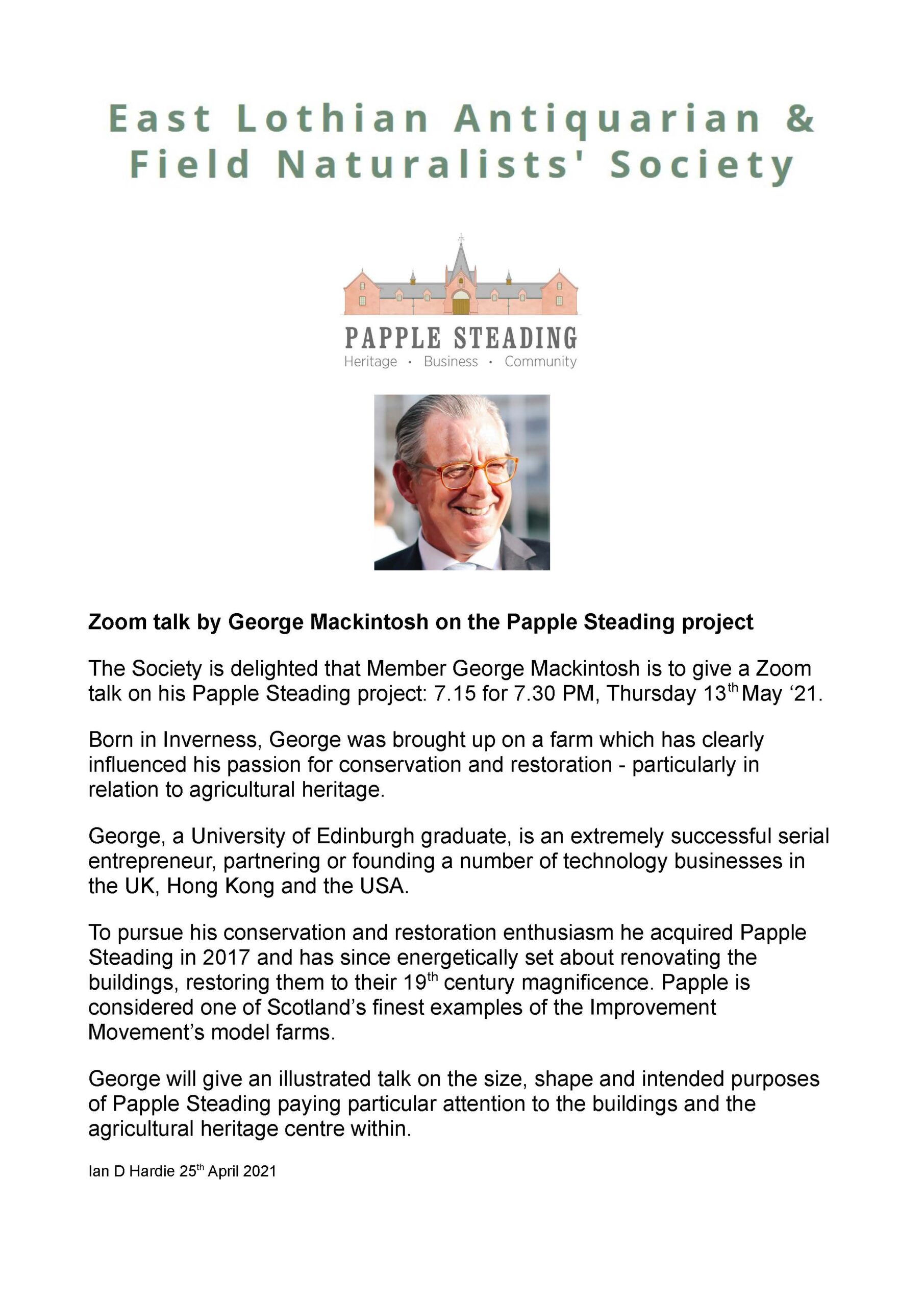 I should like to wish you a Happy Christmas and a Happy New Year, after what can only be called an annus horribilis 2020. It has been frustrating to feel we have had to abandon a year’s programme.

We are continuing preparation of volume XXXIII of the Transactions and are confident that they will be published in the spring.

You may have accessed successful talks by other organisations on Zoom. We are considering doing this ourselves in the New Year, and will keep you posted.
During lockdown I was persuaded to write about some local history. Three articles appear on our website, and others on Dunbar Community Council’s site. Dunbar Community Council has now published these in a book, which will appear before Christmas. The order form is attached.
Hopefully we will soon be able to start planning events again, including our Annual Dinner.
Best wishes till we meet again, as surely we will, some sunny day.

1 The Improvers – The Lairds  END_OF_DOCUMENT_TOKEN_TO_BE_REPLACED

On the south side of the High Street Prestonpans (NT384 743) lies the West Kirkyard. Entered by a central double gateway, a path now leads through to the Penny Pit centre. This rectangular walled enclosure is of ancient origin, formerly belonging to Newbattle Abbey.  In 1595, when John Davidson was appointed Minister of Prestonpans he recorded that: “Thomas Sherila ye first yet died after my coming to Prestoun, the lairde’s boundes having nae buriall place and L. Setoun on ye east hand and L. Newbottle on ye west refusing burial to him in Tranent and the west Kirke yarde; I Mr John Davidsoun, new come to be minister at salt-prestouns wrote at ye desire of ye defunct’s friendis to Musselburgh session for grant of burial amang yame, quilk was granted on conditioun yet we sought not ye like again.”  (CH2/307/28/133).

“The Presbytery of Haddington, realizing the urgency of the matter, sought to assist the minister with the work. A Committee was appointed to confer with Lord Newbottle on the subject and also on the provision of a stipend. It looked at first as if his Lordship was to be most helpful, as he agreed to join in the undertaking with the Laird of Preston. He soon began to demur, however, to the Presbytery’s proceedings, and so far from keeping his promise, is said to have become a hindrance. Finally, he excused himself on the grounds that he thought of repairing the Kirk (the ruined manorial chapel) on his own estate and providing a minister for it. (John Davidson of Prestonpans  R Moffat Gillon, London 1936) This indicates that a chapel existed on the west site long before 1595, probably built to serve the salters and miners employed by the Abbey of Newbattle, and possibly destroyed by Somerset in 1544.  After Mark Kerr, Lord Newbottle, died in 1609, the estate was sold. The first recorded burial found in the West Kirkyard is that of Isobel Riton on 11th  March 1603. (CH2/307/28/131). It should be noted that in the Heritors records of the 1890’s the site was always referred to as the West Kirkyard.

The Heritors of the Parish maintained the graveyard until 1928. In 1872 their minutes record “that the south wall has largely collapsed”. It is likely that this is when some of the now very weathered, fine old carved memorial stones of the 17th and 18th century were incorporated into the south and west walls. In the same year a new entrance, was made on the north, with solid pillars and the iron gates that remain today. (HR255/ 1 p.165)

Entering now only two large 19th century stones remain in the centre of the graveyard. All the other stones, mostly of 19th and early 20th century, were gathered prone in the NW corner of graveyard in the 1950’s

A detailed description of the early finely carved stones by Alan Reid can be found in volume 42 of the Proceedings of the Society of Antiquaries of Scotland 1907/08. 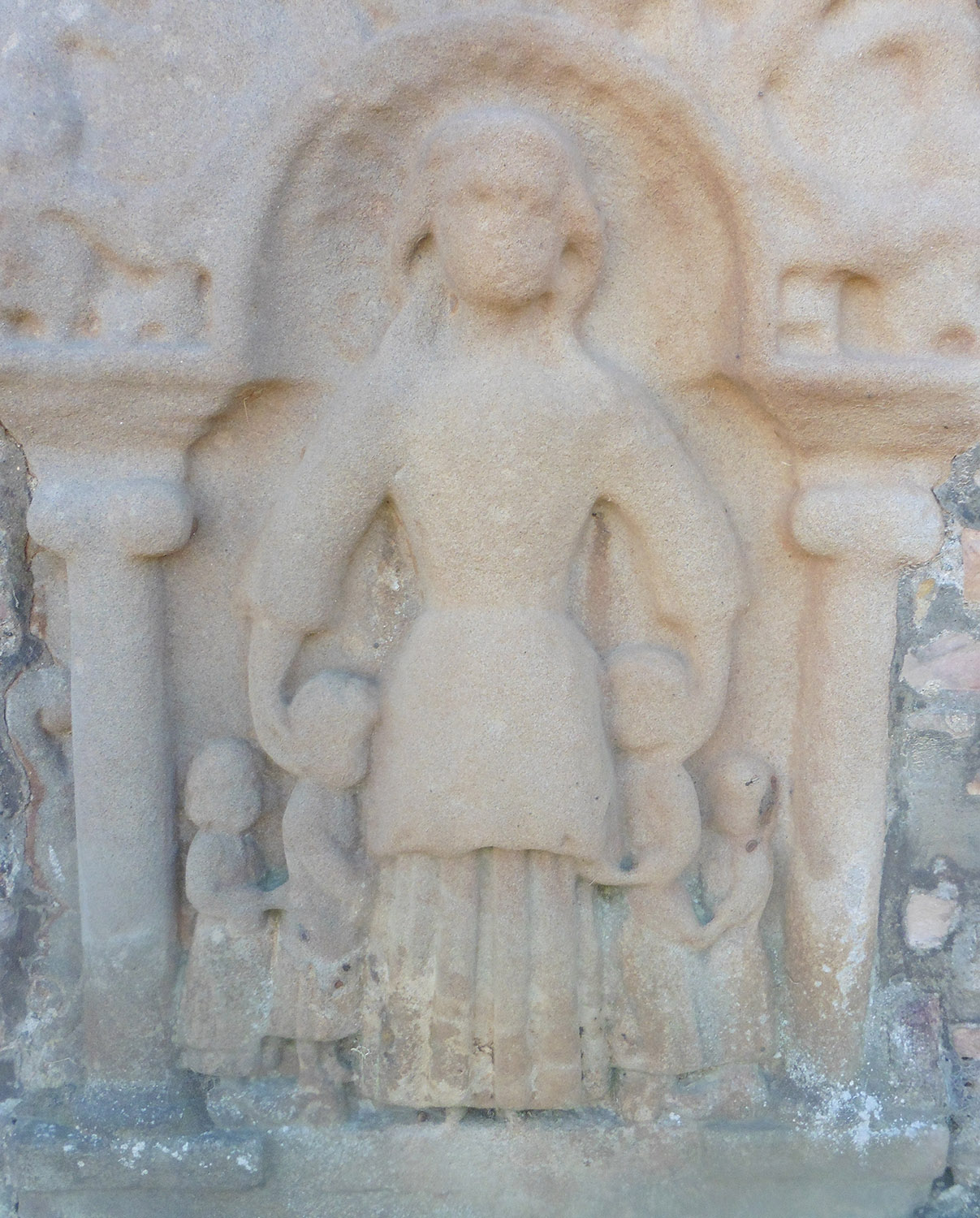 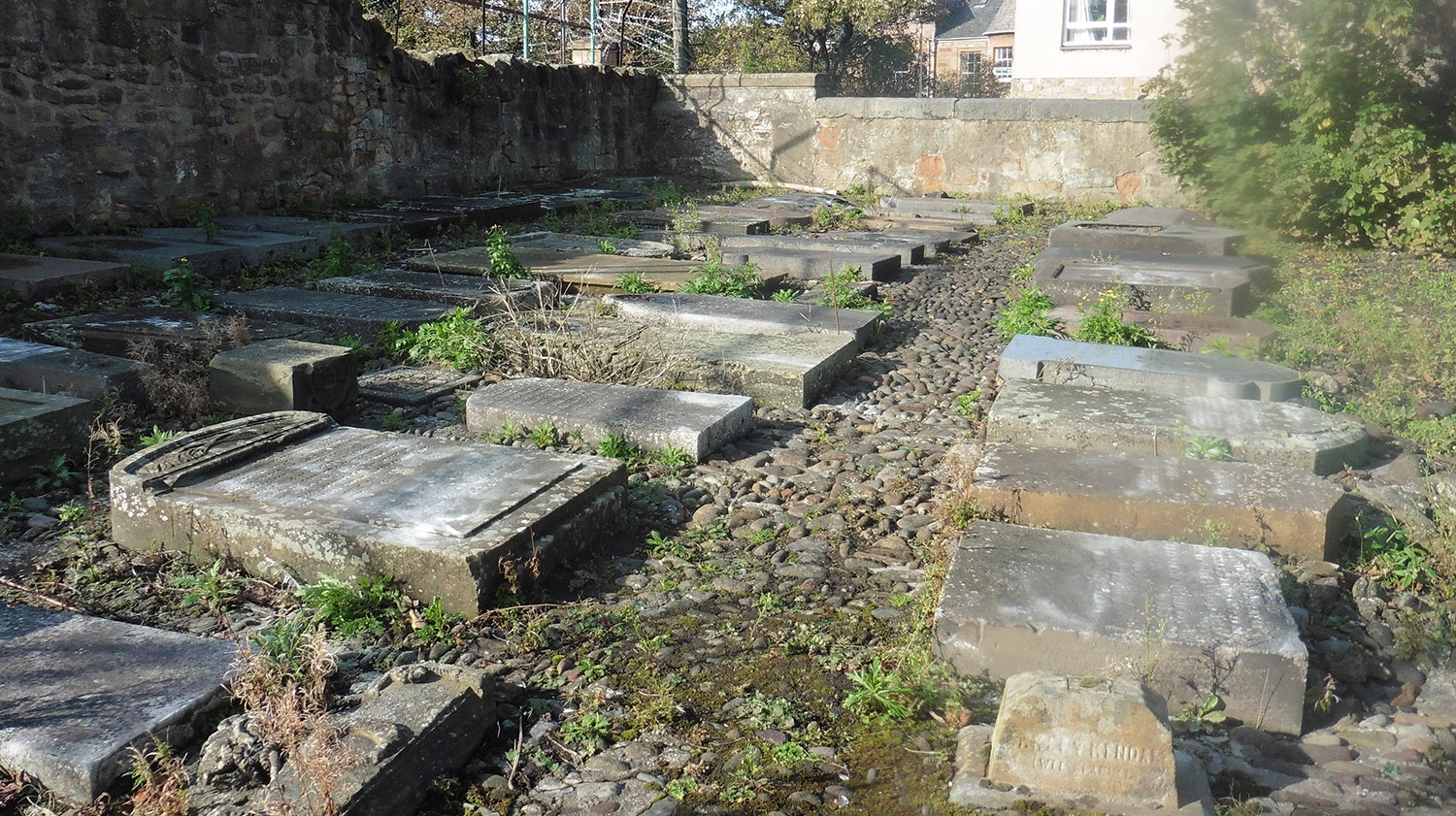 The ancient ecclesiastical history of Dunbar is illuminated by an ancient rhyme, but it is confused because there are two versions. The rhyme was

The second and probably later version has

St Ann’s upon Dunbar Sands, stands nearest to the sea.

END_OF_DOCUMENT_TOKEN_TO_BE_REPLACED

Haddington House has just undergone extensive refurbishment and restoration and is now available as offices for local businesses and will provide useful income for the Lamp of Lothian Trust.

The Society was concerned about the state of the House as far back as 1942. They attempted to secure its future but did not have the resources to do so. They were however able to do so because the Earl of Wemyss became involved. He supported the Society until his death but his main contribution to the affairs of the Society was, to make it possible for them to realise the ambition of securing the future of Haddington House.