1 The Improvers – The Lairds

3 The Technical Advisers or practical blacksmiths

4 The Farm workers who carried out the work

By 1810 the work was done and Scotland was the envy of Europe as a result of the Napoleonic war prices and rents rose A local song stated “Bonaparte ‘s a friend o’ mine.” Important work was done by Cockburn of Ormiston, the Earl of Haddington, Fletcher of Saltoun and others.

The Fletchers realised the importance of Technology and Andrew Fletcher sent James Meikle to go to Holland and study barley mills. His sister in law Mrs Henry Fletcher went to study mills for Holland linen.

The best-known wright was Andrew Meikle born in 1719, son of James Meikle. He was a wright at Houston Mill. He patented a grain dressing machine in 1768. He patented a mill c1778 and in 1784 a drum threshing machine. In 1787 built for George Rennie of Phantassie a machine which was driven by horses. Machines like these were built on many lowland farms.

Their presence is recognised by their octagonal horse mill houses. There are two in Dunbar and one in Stenton. Two of these are now incorporated in houses, the third now in poor condition is at the Roxburghe funeral parlour. Meikle did not make much money and a subscription was opened for him by Sir John Sinclair and others including John Rennie and James Watt. The machine however was a success. It could be driven by men, wind, nout [bullock] or water It would thrash in twenty minutes what a man could flail in a whole day. It was estimated that it saved 30 to 40 %. It needed six people to work it; one, with the horse, one to hand the sheaves, one to untie them, one to spread them on the inclined boards one to riddle the grain, and one to remove the straw.

It was equally successful whether driven with either water, wind or horse. Interestingly one survived at Beltondod. This became known to Norman Cartwright and with the co–operation of Mrs E Jeffrey of the Halls he wrote an article in the vol XI [1968] of East Lothian Antiquarian Society Transactions. He provided excellent and useful illustrations.

This raises the interesting questions, why such a mill came to be at Beltondod and why it survived. Beltondod and Friarsdyke are described as being on Dunbar Common but a later suggestion is that they are isolated pockets on the common but with access to it. It must have been established when there was high demand. In the 19th century demand dropped and there was much abandonment of upland settlements. There was 14% decline of steadings between 1860-1897. There were amalgamations rather than abandonment of farmland on the moorland edge which this was. By the time Cartwright discovered it the farm was uninhabited and was owned by the Jeffrey family of Halls Farm. The two farms, Beltondod and Friarsdyke were originally on Belton estate and were established before the dispute about the enclosure of Dunbar Common. Such farms could only have been established at a time if high returns which was so c1800 at the height of the French wars. The farms were simple enough. A small cottage with a simple steading but when one considers the situation even this is remarkable. They are at a high altitude, 900’ with difficult access on a rise from Lothian edge. They required horse transport and probably a sledge or a pack horse and it was no easy task to get there. When the last tenant died his body was brought down to Halls with a tractor. The building was of rough whinstone but there was some high-quality woodwork especially in the byre. There was room for two horses.

Why build the mill? It was on marginal farmland and with a small acreage and the mill must have been intended for at least the two farms. Even with the Napoleonic prosperity it is surprising. The only dressed stones were in the mill. It was remarkable workmanship, and in good order after 150 years. It had good joinery, fine made bolts and chains and excellent working parts indicating that it had not had too much use. It had no horse house. The amount of use did not justify the extra expense of building one. What kind of horse would they have? I suspect a small pony, though I have not noted it I feel we found a small horse shoe. Why did it come to an end? I suspect it was a casualty of the agricultural depression c1880-90.

What was life like for the people? It was extremely simple and very lonely. Beltondod was on the fisherwomens’ route over the Lammermuirs to Lauder so they would be able to get fish and some chat. Children presumably went to school after 1870 but what a trek to Spott and worse back. They probably went to church on the four communion Sundays.

There was little evidence from the dump. There was some broken china, one broken milk crock, a few medicine bottlers, two or three whisky bottles. They presumably had one a year. There were some old scythes carefully stuck in the mill. There was no power but a simple pump. There was evidence of a cow and hens but no pig stye, but surely they must have had at least one pig.

There was a reduction of the number of steadings in the twentieth century. It could only have been subsistence farming, tolerable perhaps in the poverty of the thirties but in the radio age of the fifties it must have become insupportable. In fact, the old man died in March 1949 and it was vacated in November 1949. [Friarsdyke continued until 1967/8.] The names were recorded in the stable; James Hardie Friarsdyke, RJ Bell Cocklaw, Mr John Turner Beltondod, date June 22 1949 [Presumably a record by his friends for he was dead and his widow about to vacate. ]

Something close to peasant farming continued, Life for the ‘oot bye’ farmer as it was known in Northumberland was a grim struggle against the elements. Life on such a farm was a great contrast to the prosperity of the great farms of the area described by A G Bradley in ’When Squires and farmers thrived’.

Norman Cartwright was anxious that this important survival should not be lost. Faced as it was by neglect and possible vandalism, he arranged with Alexander Fenton that it would be acceptable to the National museum and arranged with the owner RSG Baillie that it could be removed. He was faced with the problem of how the rescue was to be achieved. 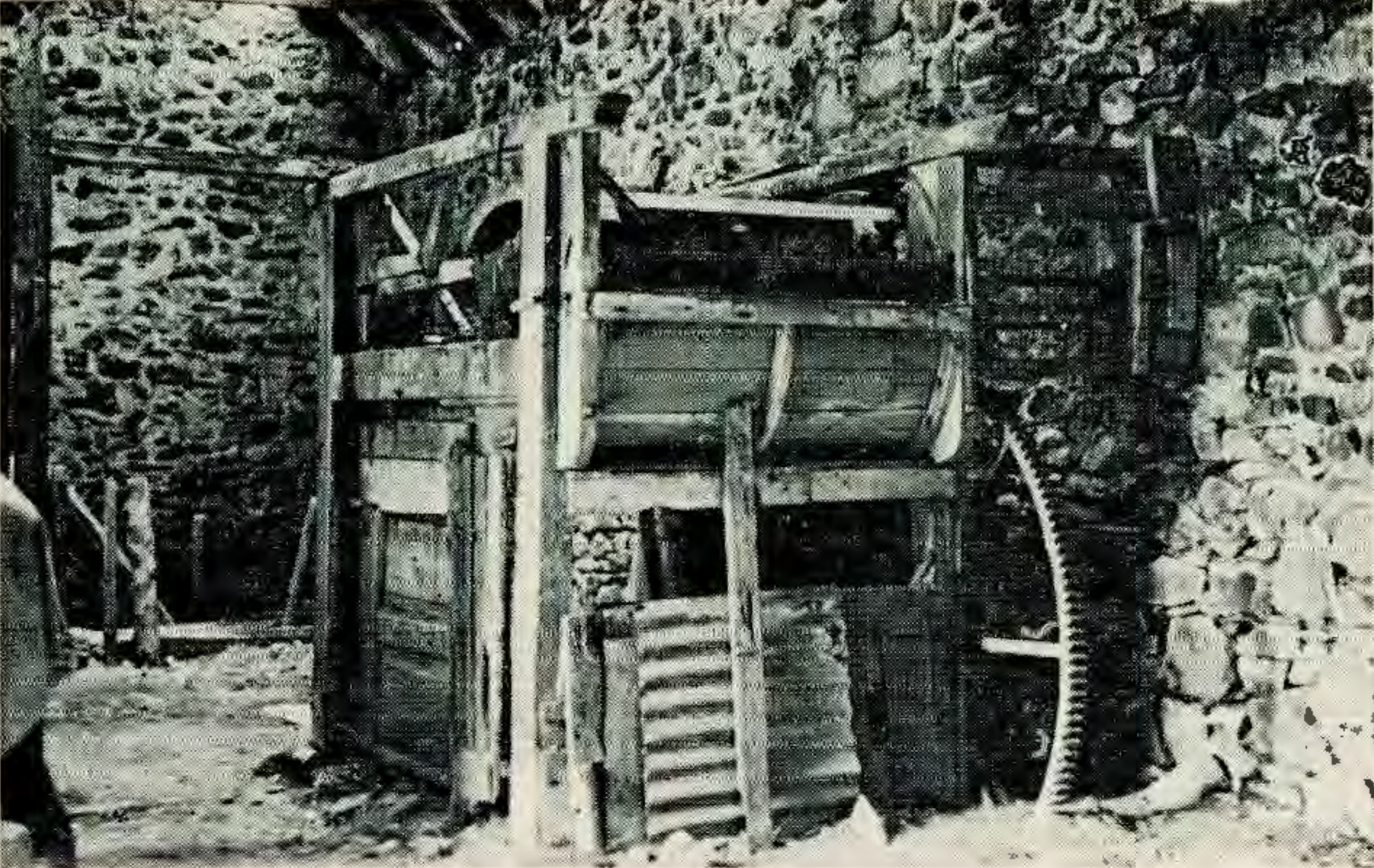 He asked me if I could help. I arranged with Sam Macmillan and Rennie Weatherhead that we would provide a work party of Duke of Edinburgh pupils from Dunbar Grammar School and we would dismantle it and arrange to get it down to the main road to be transported to Edinburgh. Several visits were made and the boys undertook the task enthusiastically. This was done in 1977. The task was accomplished and we hoped the mill would be assembled at Ingliston by summer 1978. The metal gin was left for another arrangement to be made. This was to prove a vain hope. It was a great disappointment to Norman Cartwright, RSG Baillie and our group that the museum did not carry out the expected restoration. A later scheme was considered to restore the mill at Phantassie but this also did not come to fruition. The mill is in the museum store. The ironwork is still at Beltondod.