Seán O’Reilly comments: “How sad about Brian; I remember him very fondly, not least for his quiet but supportive advice. A genuine classic, with a huge civic interest.” 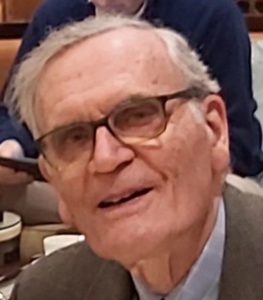 David Campbell, writes: Brian died peacefully in the Edinburgh Royal Infirmary, attended by his wife Alison and daughter Juliet. Like Alison, whom he married in Edinburgh in1961, Brian came from an Indian Army background. A graduate of the Architectural Association (ARCUK 1959), he was an early holder of the London University Diploma in the Conservation of Historic Monuments. His career in local government took him from the GLC to Portsmouth and then Glasgow (Assistant Chief Planning Officer,1973 – 75)). This was followed by five years as Principal Professional Technology Officer with the HBC before completing his career with the Planning Inspectorate in Bristol (Senior Architect Planning Inspector, 1982 – 94). He kick-started his retirement by taking an MA in Mediterranean Archaeology at Bristol University. After he and Alison moved back to Edinburgh, he joined the AHSS and became a member of the Forth and Borders Committee. Although the AHSS was the centre of his voluntary interests it was by no means the only one. He was Convenor of ASCHB, Scotland, and Hon Secretary of SPAB for Scotland. He founded the East Lothian Panel in 2003, after he and Alison moved from Edinburgh to Musselburgh.

On the Panel, Brian’s formidable experience was lightly worn. His invariable courtesy made site visits a social occasion; and he regularly tested the boundaries of our remit with issues identified from his many outside contacts. In his final year, despite increasing ill health, he stepped up heroically after the retirement of our Secretary, circulating annotated agendas as a focus for discussion. This time-consuming task held the Panel together during a difficult period.

Already the holder of a Civic Trust Commendation for the restoration of a Regency house in Southsea (1972), Brian’s final projects included the exemplary and public spirited conservation of his part of the historic wall to the Pleasance in Haddington. He went on to replace the gimcrack modern porch to his and Alison’s cottage with one designed by himself, traditional but not slavishly so, carefully detailed, an example of his abiding originality and liveliness.

Another fellow panelist, Stephen Bunyan, Chairman of the East Lothian Antiquarian and Field Naturalists’ Society, writes: I endorse all that has been said about Brian’s qualities. I held him in the highest regard. My late wife Diana and I knew Alison at University and met Brian when they visited us shortly after our arrival in Dunbar. We maintained contact over the years and I renewed our friendship after they returned to Edinburgh.They joined the Antiquarian Society when they came to East Lothian and have been regular supporters. Brian will be greatly missed by all who knew him.

Fellow AHSS member Bill Dodd writes: Mr Valiant-for-Truth in Pilgrim’s Progress is perhaps the best model of Brian Young’s character and endeavours after his personal moment of enlightenment to the cause of the safeguarding and conservation of our built heritage. This life-long commitment came after his 7-years’ training at the independent Architectural Association in London, and registration as an architect in 1959. For his generation there were no post-graduate institutions to peruse his new field of interest, and I met him in 1967 when I was following a similar lifelong commitment to conserving historic architecture. By then, Acts of Parliament protected what were termed ‘Scheduled Ancient Monuments’ (1913 & 1931, Ministry of Works)) and ‘Listed Historic Buildings’ (under post-war planning ministries). This explains the title of the post-graduate, 2-year part-time course we both attended while working for GLC Historic Buildings Division, under Dr W A Eden, for officers of both GLC and Ancient Monuments branch of MoW, working out of London. Funded by a charity, it was open to foreign architects and art historians, and was influential in establishing a wide scope of the curriculum (and held in LondonUniversity’s Institute of Archaeology). After several years this pioneer course closed when its funding ceased, but it’s graduates, and others, formed the still-active Association for the Study of Historic Buildings which was instrumental in the current independent Conservation Course at the AA School in London (this end was in the beginning, for Brian and myself!). We met again several times, 1974 – 84, when I was an expert witness for an English county council in public enquiries affecting listed buildings, and Brian was the planning inspector hearing the case, but it was only in 2003 after my retirement to Dunbar, that I was welcomed by Brian, already deeply involved with committees and convenor of Scottish ASCHB, Hon Secretary for SPAB, Scotland, and Secretary of the AHSS East Lothian Panel. In the following 17 years I have learned to appreciate Brian’s great competence and effectiveness as an advocate for historic buildings, in committees and to owners on sites, and his quiet confidence and expertise in panel discussions on debatable cases. His powers of persuasion were effective in persuading me to take over as secretary for the Panel, while he and Alison took a prolonged exploration of India, and my term as Secretary continued until I retired after a stroke made me unable to drive to examine buildings, and a more satisfactory communal way of consideration has resulted. Even in the last weeks before his death Brian was effective in furthering the work of the Panel by producing a personal triage of cases for our guidance. He continued his early chosen vocation to further the cause of conserving historic buildings by all means until his death left his friends and family to mourn his passing, but also to celebrate this veteran of the early days of conservation studies.

Andrew Robinson, founder and former Chairman of the Haddington and District Amenity Society writes: Brian was a member of the HADAS committee over a number of years. When he was starting to cut back on his activities he remained closely in touch and many a time would write offering support, suggestions or, at times, criticism, the latter when he might be looking for more activity on a certain front. It mattered to him that everything possible should be done to ensure that the place of such importance to him should be looked after and appreciated. He was impatient and at times indignant, when he felt that the priorities which he had identified were not being properly heeded. He always spoke with an authority which came with a lifetime of experience and he commanded attention and respect for that reason. His professional life was spent doing what he would have chosen to do anyway. At the same time he was not only a “buildings man”. He was active in many activities within the town. Brian was always popping up.

After he died Alison wrote that Brian enjoyed his time on the HADAS Committee. “He took it very seriously. He never gave up his interest in the buildings of Haddington and District, and indeed in whichever town we were living in, it was always the same.”