A visit to Melville Castle Hotel was the final outing of the season. It was led by the president who gave a short summary of the history of the building. The estate was noted as far back as 1155 when it belonged to Galfrid de Malleville. In the 18th century it became the seat of Henry Dundas, Viscount Melville who was virtually ruler of Scotland until his death in 1811. The estate remained in the possession of the Dundas family until c1980. It is now a hotel where Members had tea and visited the restored main rooms.

After the Castle visit certain Members explored the forested grounds. The most notable tree is a majestic Spanish Chestnut which was planted some 450 years ago by a companion of Queen Marie Stuart, Seigneur David Rizzio as an act of friendship. 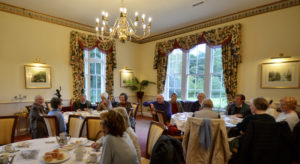