The Society visited Barony House, Lasswade on Sunday 11th October 2015. Members were met by the owners Mr and Mrs Davies, who kindly opened their home and garden. Stephen Davies led a tour of the house and garden and explained its rich history including especially its notable occupant Sir Walter Scott and his wife Charlotte.

Barony House originated as Lasswade Cottage, which was built in 1871 by John Clerk of Eldin House for his nephew. He was the seventh son of Sir John Clerk of Penicuik. His brother-in-law was Robert Adam, the most notable architect of the day. John Clark was, among other achievements, a pioneer of the late 18th century romantic landscape movement and extended a smaller house into a “cottage-orne” with a thatched roof and bow-fronted living room. This unique house attracted the newly married Sir Walter Scot, who rented it in 1798 as a summer retreat. Scott and his wife spent six years there, entertaining his many admirers and friends including the Wordsworths and Thomas De Quincy. In 1804 Scott was appointed Sheriff Depute of Selkirkshire and moved away.

Further extensive additions were made by the architect James Tait from 1913-1919.dormer windows in the Scottish Baronial style.

At the conclusion of the visit members were entertained to tea and spent some time enjoying the garden.

Thanks were expressed to Mr and Mrs Davies by the president. 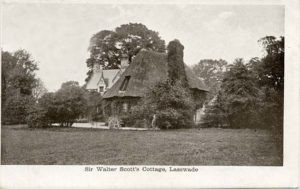 An old postcard of “Lasswade Cottage”